Feel free to talk about anything and everything in this board.
Post Reply
66 posts

Well, the theme of this is to understand why everyone ended up with their username that they use today. Of course some are obvious, such as... the pillar of autumn we can assume likes the pillar of autumn from halo. But I do not know of why 'Taxi' is called such, maybe you some of you guys do.. but i don't, so let's share the stories of how our MGM members get their names.


It all started one night when i'm lying in bed, then i came up with the idea of going to school the next day and being random, that way i'd get some cheap laughs from people, and i'd also be able to mildly annoy my friends, which is nice.

So then, the next day, i went to school and told every single person i knew that 'I like pie!' Then apparently my friend got so annoyed he started hating pie, and we'd have ridiculous and illogical arguments about pie. Then for the sake of arguing i've made up multiple facts about pie, about how they are the center of the universe, about how they're the wisest things on earth, how they beat the crap outta pizza and etc. (It was like 2 years ago, but yes, we knew it was a joke, yes, we enjoyed the joke.)

Then because I've made up so many facts about pie, one of then being 'the study of pie is called pielogy' and 'he who studies pielogy shall be called a pielogist'. Then when i'm making an account once, I just decided. 'Mmmm, I'll call myself Pielogist!'

And that's my story of how i got my name.

no, the reason i'm the pillar of autumn was because i couldn't think of anything else... 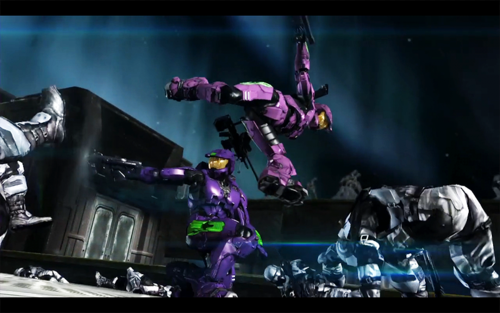 Amy: That took a lot of thought to come up with.
Divine: Demon on wiki has that word tossed around, props to Ghosts for calling me a demon.

TaxiService! that's because the first days i played in halo i liked to be the warthog driver! If you see someone named Taxi you'd guess he drives usually, wouldn't you? XD that's more or less why this is the name i chose. <_<


...good times those was. i still thought of bloodgulch as an actual canyon, and i had not the feeling of emptyness that knowing how the bsp is made gives you. \-:

...i could still host! and i used to host races, and koths, oddballs! and i would drive people in places... and make evasive manouvers against snipers and all that stuff...

but then a day my ISP did something that prevented me (and all the people who uses this ISP) to forward ports. ):
So i stopped hosting, and driving... and lost much of the poor skills i had. XD

Ghosts its time for you to post your story. Kiyoshi is my uncle's name.

Kiyoshi wrote:Kiyoshi is my uncle's name.

That must be really weird when i call you uncle kiyo then...

I was levdawg.. then some kid wanted me to join a clan sort of thing. Don't know why, but yeah he said add 'Mota' to your name. So then I arrived at Mota-Lev.
Stupid tinypic removing my images
Top

Mota-Lev wrote:I was levdawg.. then some kid wanted me to join a clan sort of thing. Don't know why, but yeah he said add 'Mota' to your name. So then I arrived at Mota-Lev.

Hahaha, he just wanted you to have a reference to weed in your name, silly Levi.
Top

Yup.. and I never knew what it meant till about a year ago Right, wish I didn't have lots of names now.
and Shiiit, was was my first one? it had something to do with ninja's, but I know my second name I had was AJ Ninami. I was very fascinated by ninja's at the time, and so I went through lots of different ninja-type names, excluding "Impaled Flabja" which someone made as a corruption of "AJ Ninaml". anyways, My current name, Flaming Bunnies, is off Foster's Home for Imaginary Friends, a kids show my sister used to watch all the time. It was off this episode where the main characters were building a trolley (if you don't know what this is, it's basically a wooden motor-less go-cart which you ride down a hill) and were auguring over what to paint it. one wanted flames, one wanted bunnies. as a compromise they painted flaming bunnies.

Seabees4: Needed a username, found a random poster on some wall somewhere about Seabees. THen that was taken so I put on 4.
Seabeast: Because why not.
Beast O' Teh Sea: Because someone PM'd me with the topic "Beast O' Teh Sea" and it said "That's who you are o_O".

Thag originally comes from ThatGuy which was my nickname at school. Which was then stolen by another modder. I then shortened it to Thag so I could put a Clan Tag before it in the Halo Demo.
Done and done. Well, mine came from the final Esper in FFXII. Zodiark was a cool boss in Final Fantasy, also the fact that he looks like a shrimp, well that got my attention. So when I was making a username for Halo Demo I just felt making it that. So hence my name Zodiark here.
Top
Post Reply
66 posts